If, besides your therapies or recreation you are also interested to know more about Sri Lanka and its people, you can sign up for excursions while you are there.

You should schedule the excursions right at the start of your stay in order to enable us to take them into account in our therapy schedule.

Our home page lists a number of destinations where you can get an initial impression of the choices Sri Lanka offers you.

Our local team will provide you information on prices, duration of the trips and their exact programme.

These half-day excursions offer a pastime and a chance to get to know the nearby countryside.

Depending on the time of arrival, the group will stay overnight in Negombo or en route to Anuradapura. The first visits will take place on the way.

SIGIRIYA The Lion´s Rock (The Palace in the Sky)

Visit in the early morning
The mass of rock towers over 200 metres above the jungle and previously served as a fortress. When turning off the jungle road, visitors will get an unforgettable view of the red rock which stands out against the blue sky.

This site must have been even more breath-taking when the palace crowned the rocky peak and the white marble walls, the bronze roofs and the jewel-filled spires were flooded by sunlight. The world-famous frescos of Sigiriya are extraordinarily beautiful. Images of girls, nymphs or heavenly beings were painted in tonal colours onto the gleaming rocks. The heyday of Sigiriya was only brief. The palace was inhabited from 477 to 495 AD, and was one of the visionary constructions which once adorned the land. There are many varying representations of the Sigiriya Era, as history loses itself in a multitude of legends, love stories and romances. A story remains, however, of King Kasyapa, the builder with an artistic nature (477 to 495 AD). Bards sang about him whilst plays and films attempted to portray his personality and his works.

The town is located to the south-east of Anuradhapura, 216 km away from Colombo. In the Middle Ages, it was the capital of the island. After the city was occupied by Indian conquerors at the beginning of the 11th century, the location of the government was moved to Polonnaruwa. The remaining structures are the remnants of the reigns of just two kings. The city was lavishly constructed. Three concentric city walls were built, and numerous parks, gardens, palaces, temples and shrines decorated the city. A well-developed network of canals and an artificial lake (Parakrama Samudra) ensured a supply of water.

The city is situated 250 km away from Colombo. Anuradhapura was founded in the fourth century BC and was the first capital of Sri Lanka (50,000 residents). According to the Mahavansa Chronicle (the first Buddhist chronicle), Anuradhapura was created in this period on the basis of an exemplary city-planning concept. Special districts were built in the city for residents of particular professions and classes. There were hostels, infirmaries and separate graveyards for those in the high and low castes. The provision of water was secured through the creation of water tanks. Anuradhapura was the political centre and capital city of the island for over 600 years. Due to internal fights for the succession of the throne, Anuradhapura could no longer withstand the pressure of the South Indians. After heavy fighting, the city had to finally be abandoned. The jungle began to spread itself over Anuradhapura. Through excavations, the cultural and political centre of the Singhalese kings has experienced a resurrection. The ruins live on as silent witnesses of an advanced civilisation in the shadows of the trees, in the silence of the cool stones and in the protective clarity of the sky.

Anuradhapura is seen as a holy place due to the revered holy Bodhi tree which is located there. This tree is allegedly the oldest in the world.

In Dambulla stands a large, freestanding mass of rock.

The King used these rock caves as a hideout for 14 years during the occupation of Anuradhapura by the Indians. After the recapture of the capital city, the caves became a magnificent temple made of rock. The journey continues to Matale, a town in the central province of Sri Lanka which lies at around 470m above sea level and has around 37,000 inhabitants.

Matale is the centre of an important plantation area, where rubber, cinnamon, pepper, chillies, tea, rice and vegetables are grown. The prosperity of these numerous cultivations is affected by the humid, tropical climate and their location in a mountain basin where the only gaps are in the north. The city is dominated by the British Fort Macdowall, which was built at the beginning of the 19th century during the warfare between British colonial forces and the Kingdom of Kandy. It lies above the central Saxton Park, which is located close to the business and administrative centre of the town. The Hindu temple, with its lavish adornment of colourful statues, is extremely interesting and is also located in the centre.

Kandy is the cultural centre of Sri Lanka, located in the centre of the country, 129 km away from Colombo. With 150,000 inhabitants, Kandy is the fourth largest city in the country. The city was established in the 13th century.

For Buddhists, Kandy is a holy city, not least because of the alleged tooth of Buddha which is preserved in the Temple of the Tooth. But the Royal Botanic Garden is also a must-see for every tourist. Aside from that, we will also visit the ‘Gem' Musuem and the place where the gems are carved.

Located 50 km south-west of Kandy. Here you will discover an interesting site – an elephant orphanage. Every day, you can watch the elephants bathing in the river. It is also very interesting to see the baby elephants being fed. The elephants are all orphaned or disabled and are cared for on the site.

Onward journey and overnight stay in Nuwara Eliya.
It is very cool in the evenings and during the night, so you will need some warmer clothes.

You will leave Nuwara Eliya and travel west along the coast, passing through tea plantations, vegetable cultivations, waterfalls, mountain forests and small settlements. From the serpentine road, you will always enjoy a wonderful panoramic view of the surrounding mountains. Later, after reaching the lowlands, you will pass through rice fields, coconut palm groves and rubber plantations.

Visit to a tea factory

Arrival and welcome at the VILLA LANKA PEARL 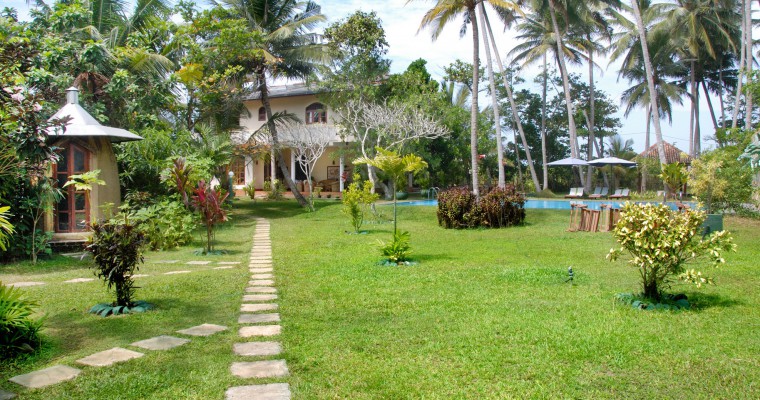